Throughout the year, hackers have been able to infiltrate multiple crypto exchanges across the world taking with them millions of dollars worth of digital assets. Despite the massive losses recorded, Bitcoin was able to shrug off the “FUD” and continue its uptrend.

$160 million worth of cryptos stolen

New Zealand-based Cryptopia was the first cryptocurrency exchange to get hacked this year. The attack took place on Jan. 14 after the company announced an emergency “maintenance.” By Jan. 15, the exchange’s website went offline, including support and blog pages. On that day, Cryptopia announced that it had suffered a “security breach which resulted in significant losses.” 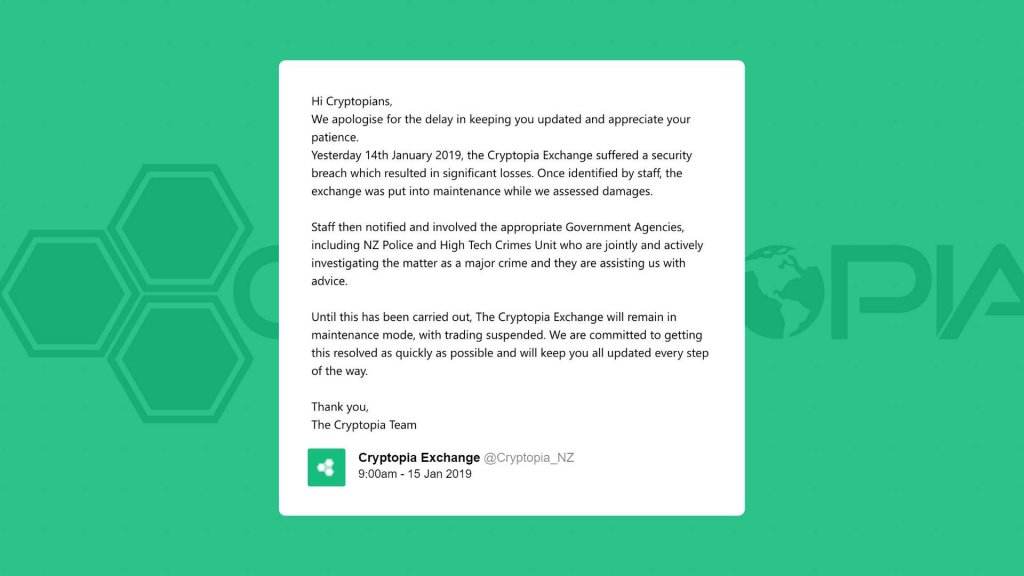 Elementus, a blockchain data analytics firm, estimated that $16 million worth of Ethereum and ERC-20 tokens were lost. Later on, the company reported that the hacker kept Cryptopia’s private keys and was able to withdraw an additional 1,675 ETH.

The month of March saw two cryptocurrency exchanges lose their funds. First, Singapore’s DragonEX reported via their official telegram channel that the exchange was compromised, and approximately $7 million worth of cryptos were transferred out of their wallets.

Then, South Korean-based exchange Bithumb released a statement stating that an “abnormal withdrawal” occurred at 13:00 UTC on March 29. The unauthorized withdraw resulted in the loss of $13 million worth of EOS. The firm took full responsibility for the funds lost as it suspected that the breach was an insider job.

“All the [stolen] cryptocurrency is owned by the company, and all members’ assets are under the protection of a cold wallet.”

Along the same lines, Binance, the world’s largest crypto asset exchange in daily volume, experienced a security breach involving 7,000 BTC valued at around $40 million. Changpeng Zhao, the exchange’s CEO, said that the hack represented about 2 percent of Binance’s BTC holdings. And, reassured investors that all the funds would be covered by the exchange.

“Binance will use the #SAFU fund to cover this incident in full. No user funds will be affected. We must conduct a thorough security review. The security review will include all parts of our systems and data, which is large. We estimate this will take about ONE WEEK. We will post updates frequently as we progress.”

Moreover, Singapore-based Bitrue announced in a series of tweets on June 27 that a hacker exploited a vulnerability in their risk control protocol. The cybercriminal was able to access the personal funds of about 90 Bitrue users containing almost $5 million worth of cryptos.

Finally, the biggest crypto heist of the year took place earlier this week. UPbit, one of the largest cryptocurrency exchanges based in South Korea, reported that 342,000 ETH were transferred from the exchange’s hot wallet to an unknown wallet equivalent to $50 million.

Lee Seok-woo, the CEO of Dunamu, which is the firm behind UPbit, assured to cover all the losses with corporate assets. And, he ensured that deposits and withdrawals would resume in the next couple of weeks.

Despite the attacks that some of the most prominent cryptocurrency exchanges in the industry experienced this year, the incidents were not able to affect Bitcoin’s bullish trend. The flagship cryptocurrency is up 120 percent since the beginning of the year and is signaling a further advance.

Several technical patterns are pointing out that this cryptocurrency could surge to $15,000. But, it remains to be seen if volume would picks up to support such a bullish impulse.

The post Bitcoin remains strong as $160 million stolen from crypto exchanges in 2019 appeared first on CryptoSlate.